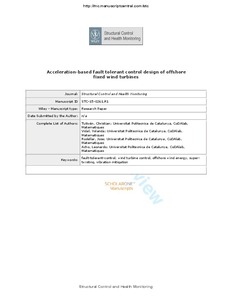 Except where otherwise noted, content on this work is licensed under a Creative Commons license : Attribution-NonCommercial-NoDerivs 3.0 Spain
Abstract
Wind turbines (WTs) are basically controlled by varying the generator load torque (with the so-called torque control) and the blade pitch angles (with the so-called pitch control) based on measurement of the generator shaft speed. These two controllers unitedly work to satisfy the control objectives, and it is crucial that they are tolerant to possible faults in the WT system. Passive fault-tolerant control comprises the design of robust controllers against disturbances and uncertainties. This enables the controller to counteract the effect of a fault without requiring reconfiguration or fault detection. In this regard, the main contribution of this paper is to propose new control techniques that not only provide fault tolerance capabilities to the WT system but also improve the overall performance of the system in both fault-free and faulty conditions. Coupling nonlinear aero-hydro-servo-elastic simulations of an offshore WT with jacket platform is carried out for several pitch actuator faults. The jacket platform motions and structural loads caused by fault events with the proposed controllers are compared with loads encountered during normal operation and with respect to a well-known baseline controller in the literature. The proposed controllers are based in the super-twisting algorithm by using feedback of the generator shaft speed as well as the fore-aft and side-to-side acceleration signals of the WT tower.
CitationTutivén, C., Vidal, Y., Rodellar, J., Acho, L. Acceleration-based fault-tolerant control design of offshore fixed wind turbines. "Structural Control & Health Monitoring", 2016.
URIhttp://hdl.handle.net/2117/98338
DOI10.1002/stc.1920
ISSN1545-2263
Publisher versionhttp://onlinelibrary.wiley.com/doi/10.1002/stc.1920/abstract
Collections
Share: