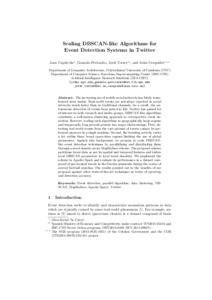 The increasing use of mobile social networks has lately transformed news media. Real-world events are nowadays reported in social networks much faster than in traditional channels. As a result, the autonomous detection of events from networks like Twitter has gained lot of interest in both research and media groups. DBSCAN-like algorithms constitute a well-known clustering approach to retrospective event detection. However, scaling such algorithms to geographically large regions and temporarily long periods present two major shortcomings. First, detecting real-world events from the vast amount of tweets cannot be performed anymore in a single machine. Second, the tweeting activity varies a lot within these broad space-time regions limiting the use of global parameters. Against this background, we propose to scale DBSCAN-like event detection techniques by parallelizing and distributing them through a novel density-aware MapReduce scheme. The proposed scheme partitions tweet data as per its spatial and temporal features and tailors local DBSCAN parameters to local tweet densities. We implement the scheme in Apache Spark and evaluate its performance in a dataset composed of geo-located tweets in the Iberian peninsula during the course of several football matches. The results pointed out to the benefits of our proposal against other state-of-the-art techniques in terms of speed-up and detection accuracy.
CitationCapdevila, J., Pericacho, G., Torres, J., Cerquides, J. Scaling DBSCAN-like algorithms for event detection systems in Twitter. A: "Algorithms and architectures for parallel processing: 16th International Conference, ICA3PP 2016: Granada, Spain, December 14-16, 2016: proceedings". Berlín: Springer, 2016, p. 356-373.
URIhttp://hdl.handle.net/2117/98304
DOI10.1007/978-3-319-49583-5_27
ISBN978-3-319-49582-8
Publisher versionhttp://link.springer.com/chapter/10.1007/978-3-319-49583-5_27