A new phylogenetic reconstruction method based on invariants 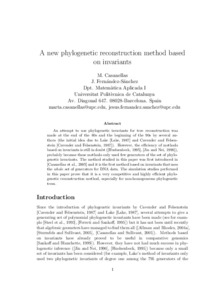 Except where otherwise noted, content on this work is licensed under a Creative Commons license : Attribution-NonCommercial-NoDerivs 2.5 Spain
Abstract
An attempt to use phylogenetic invariants for tree reconstruction was made at the end of the 80s and the beginning of the 90s by several authors (the initial idea due to Lake [Lake, 1987] and Cavender and Felsenstein [Cavender and Felsenstein, 1987]). However, the e±ciency of methods based on invariants is still in doubt ([Huelsenbeck, 1995], [Jin and Nei, 1990]), probably because these methods only used few generators of the set of phylogenetic invariants. The method studied in this paper was first introduced in [Casanellas et al., 2005] and it is the first method based on invariants that uses the whole set of generators for DNA data. The simulation studies performed in this paper prove that it is a very competitive and highly e±cient phylogenetic reconstruction method, especially for non-homogeneous phylogenetic trees.
URIhttp://hdl.handle.net/2117/983
Collections
Share: