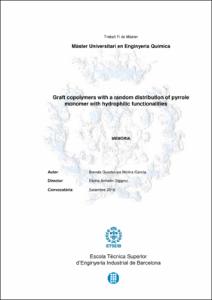 Document typeMaster thesis
Rights accessOpen Access
Abstract
An electroactive biomaterial was obtained from the electropolymerization of pyrrole (Py) monomer and a macromonomer called PAB53, which has pyrrole as backbone and chains of PEG2000 grafted. The copolymerization was carried out at a molar ratio of 1:1 of Py:PAB53 and at three polymerization times (300, 500 and 1000s), resulting in films with cauliflower-like structures as surface morphology in all cases. The topography, thickness and wettability increased proportionally to the polymerization time, attributed to higher concentrations of PAB53 in the resulting copolymer films. Therefore, the increase of PEG chains, which favors the formation of valleys and hills in the surface morphology, is also responsible for a higher hydrophilicity in the copolymer films. The electroactivity of the compounds were affected negatively with the incorporation on the PEG. However, the optical and conductive properties were good, showing a similar band gap than the semiconductor PPy homopolymer. It was established that the best film was the copolymer P(Py-co-PAB53) generated at 1000s, which was found to be an active surface for adsorption of BSA and Lyz proteins, the results revealed that the affinity of this copolymer is higher than the PPy homopolymer, suggesting that it is a promising polymer for bioengineering applications.
SubjectsCopolymers, Biomedical materials, Copolímers, Materials biomèdics
URIhttp://hdl.handle.net/2117/98299
Collections
Share: