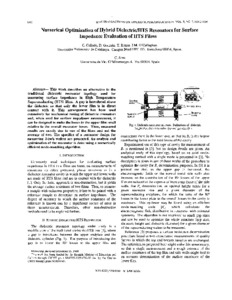 Except where otherwise noted, content on this work is licensed under a Creative Commons license : Attribution-NonCommercial-NoDerivs 3.0 Spain
Abstract
This work describes an alternative to the traditional dielectric resonator topology used for measuring surface impedance in high temperature superconducting (HTS) films. A gap is introduced above the dielectric so that only the lower film is in direct contact with it. This arrangement has been used extensively for mechanical tuning of dielectric resonators and, when used for surface impedance measurement, it can be designed to make the losses in the upper film small relative to the overall resonator losses. Then, measured results are mostly due to one of the films and not the average of two. The specifics of a resonator design for measuring 2-inch wafers are presented. An analysis and optimization of the resonator is done using a numerically efficient mode-matching algorithm.
CitationCollado, J., Gonzalo, D., Rozan, E., O'callaghan, J., Sans, C. Numerical optimization of hybrid dielectric/HTS resonators for surface impedance evaluation of HTS films. "IEEE transactions on applied superconductivity", Juny 1999, vol. 9, núm. 2, p. 1956-1959.
URIhttp://hdl.handle.net/2117/98257
DOI10.1109/77.784844
ISSN1051-8223
Publisher versionhttp://ieeexplore.ieee.org.recursos.biblioteca.upc.edu/document/784844/
Collections
Share: