Development and experimental validation of an overlay mortar with biocide activity 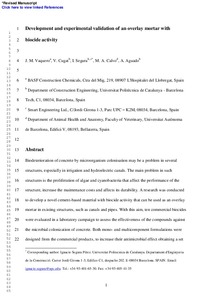 Document typeArticle
Rights accessOpen Access
Abstract
Biodeterioration of concrete by microorganism colonisation may be a problem in several structures, especially in irrigation and hydroelectric canals. The main problem in such structures is the proliferation of algae and cyanobacteria that affect the performance of the structure, increase the maintenance costs and affects its durability. A research was conducted to develop a novel cement-based material with biocide activity that can be used as an overlay mortar in existing structures, such as canals and pipes. With this aim, ten commercial biocides were evaluated in a laboratory campaign to assess the effectiveness of the compounds against the microbial colonisation of concrete. Both mono- and multicomponent formulations were designed from the commercial products, to increase their antimicrobial effect obtaining a set of biocide formulations. The formulations were submitted to a flowchart process to determine their influence on the physical properties of the concrete, evaluate the release of the actives, and their antimicrobial efficiency both before and after accelerated aging processes. During the campaign, some formulations were observed to diminish the strength of the concrete. Such behaviour was normally due to the interaction of the active with the cement hydration process. Other formulations showed a high release of active from the concrete in water, compromising the durability of the treatment. In general, monocomponent formulations did not succeed to fulfill all the requirements, thus multicomponent formulations were analysed. One studied multicomponent formulation presented particularly good results in all properties analysed. This product did not significantly change the properties of concrete and the release of active in water from the concrete was low, while the antimicrobial effects were long lasting.
CitationVaquero, J.M., Cugat, V., Segura, I., Calvo, M., Aguado, A. Development and experimental validation of an overlay mortar with biocide activity. "Cement & concrete composites", Novembre 2016, vol. 74, p. 109-119.
URIhttp://hdl.handle.net/2117/98186
DOI10.1016/j.cemconcomp.2016.09.004
ISSN0958-9465
Publisher versionhttp://www.sciencedirect.com/science/article/pii/S095894651630508X
Collections
Share: