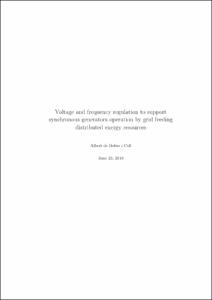 Document typeBachelor thesis
Rights accessOpen Access
Abstract
Research on new grid topologies and control configurations to support distributed energy resources is being carried out in order to improve electric service reliability and better power quality to the end consumer. Besides, due to more restrictive environmental policies and economical incentives for the deployment of new renewable energy resources, the energetic scenario seems to be moving towards a more sustainable one. With the increasing proliferation of renewable energies and distributed energy resources, however, the challenges that future grids will have to confront can only escalate. Before dealing with these new challenges, it is first necessary to fully comprehend how a standard grid is regulated and to embrace the fundamentals on grid operation and management from a technical perspective. By understanding how current grids function, the effect of these new actors on the grid namely distributed energy resources can be isolated and addressed either individually as a new phenomenon never encountered before or extrapolated from a well-known challenge of the mains. In this thesis, the operating of the standard grid is depicted together with these forthcoming technologies such as microgrids and distributed energy resources. The synchronous generator together with its regulator and its excitation system prove to be key actors in terms of frequency and voltage regulation thus special emphasis is given to them. Simulations regarding the control of the synchronous generator and its influence on the grid stability are performed to support the many literature that attribute the synchronous generator as the par excellence regulator of the grid. Finally, the interaction between an inverter-based distributed generation and a diesel-based distributed generation is studied to identify its effects on both the dynamic response of the grid and its stability. The realized simulations provide scenarios in which to test the importance of the synchronous generation inasmuch as the regulation of the grid is concerned. In addition, the introduction of an inverter-based distributed generation in the simulations is particularly interesting to present the benefits that the support from distributed generation on the grid can bring about.
SubjectsElectric networks, Xarxes elèctriques
URIhttp://hdl.handle.net/2117/98149
Collections
Share: