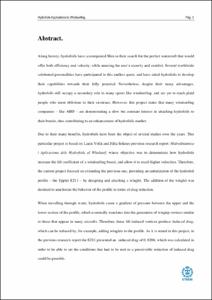 Document typeBachelor thesis
Rights accessOpen Access
Abstract
Along history, hydrofoils have accompanied Men in their search for the perfect watercraft that would offer both efficiency and velocity, while assuring the user’s security and comfort. Several worldwide celebrated personalities have participated in this endless quest, and have aided hydrofoils to develop their capabilities towards their fully potential. Nevertheless, despite their many advantages, hydrofoils still occupy a secondary role in many sports like windsurfing, and are yet to reach plaid people who seem oblivious to their existence. However, this project states that many windsurfing companies – like AHD – are demonstrating a slow but constant interest in attaching hydrofoils to their boards, thus contributing to an enhancement of hydrofoils market. Due to their many benefits, hydrofoils have been the object of several studies over the years. This particular project is based on Laura Voltà and Júlia Solanes previous research report: Hidrodinàmica i Aplicacions dels Hydrofoils al Windsurf, whose objective was to demonstrate how hydrofoils increase the lift coefficient of a windsurfing board, and allow it to reach higher velocities. Therefore, the current project focused on extending the previous one, providing an optimization of the hydrofoil profile – the Eppler E211 – by designing and attaching a winglet. The addition of the winglet was destined to ameliorate the behavior of the profile in terms of drag reduction. When travelling through water, hydrofoils cause a gradient of pressure between the upper and the lower section of the profile, which eventually translates into the generation of wingtip vortices similar to those that appear in many aircrafts. Therefore, these lift induced vortices produce Induced drag, which can be reduced by, for example, adding winglets to the profile. As it is stated in this project, in the previous research report the E211 presented an induced drag of 0, 0206, which was calculated in order to be able to set the conditions that had to be met so a perceivable reduction of induced drag could be possible.
SubjectsHydrofoil boats, Hydrodynamics, Hidròpters, Hidrodinàmica
URIhttp://hdl.handle.net/2117/98075
Collections
Share: