Adding efficient and reliable access paths to the JCF 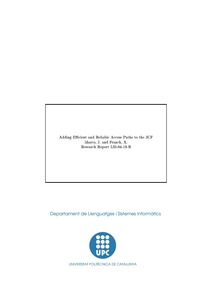 Document typeExternal research report
Rights accessOpen Access
Abstract
The Java Collections Framework (JCF) is the standard Java library for representing and manipulating collections (i.e., objects that represent a group of objects, such as sets, lists, etc.). Although JCF provides adequate functionality for many purposes, it does not offer any mechanism for accessing directly the objects stored in collections apart from the standard Java references. This absence is a crucial functionality exhibited by many other widespread Java and non-Java collection libraries. In this paper, we carry out a reengineering process on the JCF to add this kind of alternative access paths, which we give the name of shortcuts. This process relies on a framework called Shortcut-Based Framework, which has been defined as library- independent. We present this framework and then we show how it may be tailored to the specific case of the JCF. The resulting JCF with shortcuts library is fully compatible with the original one (i.e., programs using the original JCF are not required to be modified), and exhibits good behaviour with respect to efficiency, reliability and internal quality. As an additional benefit of the framework, we mention that it can be applied to other collection libraries, as we have done before with an Ada95 one.
CitationMarco, J., Franch, X. "Adding efficient and reliable access paths to the JCF". 2004.
URIhttp://hdl.handle.net/2117/97983
Collections
Share: