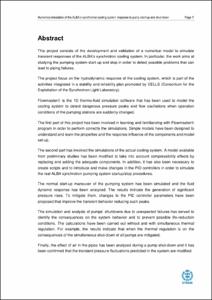 CovenanteeSincrotró ALBA
Document typeBachelor thesis
Rights accessOpen Access
Abstract
This project consists of the development and validation of a numerical model to simulate transient responses of the ALBA’s synchrotron cooling system. In particular, the work aims at studying the pumping system start-up and stop in order to detect possible problems that can lead to piping failures. The project focus on the hydrodynamic response of the cooling system, which is part of the activities integrated in a stability and reliability plan promoted by CELLS (Consortium for the Exploitation of the Synchrotron Light Laboratory). Flowmaster is the 1D thermo-fluid simulation software that has been used to model the cooling system to detect dangerous pressure peaks and flow oscillations when operation conditions of the pumping stations are suddenly changed. The first part of this project has been involved in learning and familiarizing with Flowmaster program in order to perform correctly the simulations. Simple models have been designed to understand and learn the properties and the response influence of the components and model set-up. The second part has involved the simulations of the actual cooling system. A model available from preliminary studies has been modified to take into account compressibility effects by replacing and adding the adequate components. In addition, it has also been necessary to create scripts and to introduce and make changes in the PID controllers in order to simulate the real ALBA synchrotron pumping system startup/stop procedures. The normal start-up maneuver of the pumping system has been simulated and the fluid dynamic response has been analyzed. The results indicate the generation of significant pressure rises. To mitigate them, changes to the PID controller parameters have been proposed that improve the transient behavior reducing such peaks. The simulation and analysis of pumps’ shutdowns due to unexpected failures has served to identify the consequences on the system behavior and to prevent possible life-reduction conditions. The calculations have been carried out without and with simultaneous thermal regulation. For example, the results indicate that when the thermal regulation is on the consequences of the simultaneous shut-down of all pumps are mitigated. Finally, the effect of air in the pipes has been analyzed during a pump shut-down and it has been confirmed that the transient pressure fluctuations predicted in the system are modified.
SubjectsSynchrotrons -- Cooling, Thermal analysis, Sincrotrons -- Refrigeració, Anàlisi tèrmica
URIhttp://hdl.handle.net/2117/97923
Collections
Share: