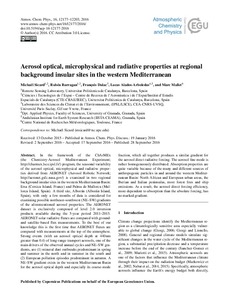 In the framework of the ChArMEx (the Chemistry-Aerosol Mediterranean Experiment; http://charmex.lsce.ipsl.fr/) program, the seasonal variability of the aerosol optical, microphysical and radiative properties derived from AERONET (Aerosol Robotic Network; http://aeronet.gsfc.nasa.gov/) is examined in two regional background insular sites in the western Mediterranean Basin: Ersa (Corsica Island, France) and Palma de Mallorca (Mallorca Island, Spain). A third site, Alborán (Alborán Island, Spain), with only a few months of data is considered for examining possible northeast–southwest (NE–SW) gradients of the aforementioned aerosol properties. The AERONET dataset is exclusively composed of level 2.0 inversion products available during the 5-year period 2011–2015. AERONET solar radiative fluxes are compared with ground- and satellite-based flux measurements. To the best of our knowledge this is the first time that AERONET fluxes are compared with measurements at the top of the atmosphere. Strong events (with an aerosol optical depth at 440¿nm greater than 0.4) of long-range transport aerosols, one of the main drivers of the observed annual cycles and NE–SW gradients, are (1) mineral dust outbreaks predominant in spring and summer in the north and in summer in the south and (2) European pollution episodes predominant in autumn. A NE–SW gradient exists in the western Mediterranean Basin for the aerosol optical depth and especially its coarse-mode fraction, which all together produces a similar gradient for the aerosol direct radiative forcing. The aerosol fine mode is rather homogeneously distributed. Absorption properties are quite variable because of the many and different sources of anthropogenic particles in and around the western Mediterranean Basin: North African and European urban areas, the Iberian and Italian peninsulas, most forest fires and ship emissions. As a result, the aerosol direct forcing efficiency, more dependent to absorption than the absolute forcing, has no marked gradient.
CitationSicard, M., Barragan, R., Dulac, F., Alados, L., Mallet, M. Aerosol optical, microphysical and radiative properties at regional background insular sites in the western Mediterranean. "Atmospheric chemistry and physics", 28 Setembre 2016, vol. 16, núm. 18, p. 12177-12203.
URIhttp://hdl.handle.net/2117/97878
DOI10.5194/acp-16-12177-2016
ISSN1680-7324
Publisher versionhttp://www.atmos-chem-phys.net/16/12177/2016/