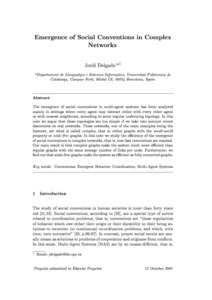 Document typeResearch report
Rights accessOpen Access
All rights reserved. This work is protected by the corresponding intellectual and industrial property rights. Without prejudice to any existing legal exemptions, reproduction, distribution, public communication or transformation of this work are prohibited without permission of the copyright holder
Abstract
The emergence of social conventions in multi-agent systems has been analyzed mainly in settings where every agent may interact either with every other agent or with nearest neighbours, according to some regular underlying topology. In this note we argue that these topologies are too simple if we take into account recent discoveries on real networks. These networks, one of the main examples being the Internet, are what is called complex, that is, either graphs with the small-world property or scale-free graphs. In this note we study the efficiency of the emergence of social conventions in complex networks, that is, how fast conventions are reached. Our main result is that complex graphs make the system much more efficient than regular graphs with the same average number of links per node. Furthermore, we find out that scale-free graphs make the system as efficient as fully connected graphs.
CitationDelgado, J. "Emergence of social conventions in complex networks". 2001.
Is part ofLSI-01-37-R
URIhttp://hdl.handle.net/2117/97848
Collections
Share: