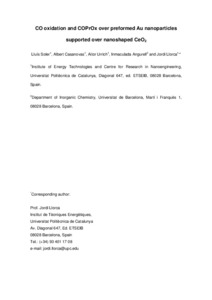 Except where otherwise noted, content on this work is licensed under a Creative Commons license : Attribution-NonCommercial-NoDerivs 3.0 Spain
Abstract
Au/CeO2 (0.25% wt. Au) catalysts were prepared by anchoring preformed Au nanoparticles over ceria polycrystals, cubes and rods and tested in the oxidation of CO and COPrOx. The use of preformed Au nanoparticles assured a constant Au particle size (ca. 5 nm by HRTEM) for all samples, which allowed to a precise assessment of the effect of the morphology of nanoshaped ceria on catalytic activity. The catalytic performance of the Au/CeO2-rods was much better than that of the Au/CeO2-polycrystals and Au/CeO2-cubes both in the oxidation of CO and COPrOx reactions. The Au/CeO2-rods exhibited the highest amount of oxidized Au and Ce(III) species by XPS, whereas in the Au/CeO2-cubes gold was totally metallic and the amount of Ce(III) was minimum. An intermediate situation was encountered in the Au/CeO2-polycrystals. Considering the differences in the oxidation states ofAu and Ce and the factthat all samples were prepared with preformed metallic Au nanoparticles of the same size, the results indicate that the intrinsic nature of the different ceria surfaces exerts a prominent role in the gold-ceria interaction and in the electron density transfer from Au to Ce, which in turn has a strong effect on catalytic activity. Gold nanoparticles strongly interact with CeO2-{1 1 0} surfaces with respect to CeO2-{1 1 1} and CeO2-{1 0 0}, even when Au nanoparticles are prepared separately and simply deposited by impregnation.
CitationSoler, L., Casanovas, A., Urrich, A., Angurell, I., Llorca, J. CO oxidation and COPrOx over preformed Au nanoparticles supported over nanoshaped CeO2. "Applied catalysis B. Environmental", 10 Febrer 2016, vol. 197, p. 47-55.
URIhttp://hdl.handle.net/2117/97815
DOI10.1016/j.apcatb.2016.02.025
ISSN0926-3373
Publisher versionhttp://www.sciencedirect.com.recursos.biblioteca.upc.edu/science/article/pii/S0926337316301072
Collections
Share: