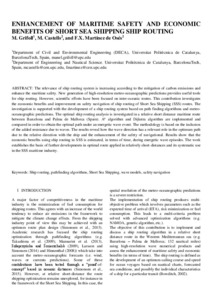 The relevance of ship routing system is increasing according to the mitigation of carbon emissions and enhance the maritime safety. New generation of high-resolution meteo-oceanographic predictions provides useful tools for routing of ship. However, scientific efforts have been focused on inter-oceanic routes. This contribution investigates the economic benefits and improvement on maritime safety of ship routing of Short Sea Shipping (SSS) routes. The investigation is supported with the development of a ship routing system based on a path finding algorithm and meteo-oceanographic predications. Results show that the economic benefits using ship routing in SSS is estimated in percentage of the total cost during energetic wave episodes. The work establishes the basis of further developments in optimal route applied in relatively short-distances and its systematic use in the SSS maritime industry. In this work, the optimal ship routing analysis is investigated in a relative short distance maritime route between Barcelona and Palma de Mallorca (Spain). Dijkstra algorithm is implemented in order to obtain the optimal path under an energetic wave event. The methodology is based on the inclusion of the drag resistance due to waves. The results reveal how the wave direction has a relevant role in the optimum path due to the relative direction with the ship and the enhancement of the navigational safety.
CitationGrifoll, M., Castells, M., Martinez, F. J. Enhancement of Maritime Safety and Economic Benefits of Short Sea Shipping Ship Routing. A: International Seahorse Conference:maritime safety and human factors. "Proceedings of SEAHORSE 2016, International Conference on Maritime Safety and Human Factors". Glasgow: 2016.
URIhttp://hdl.handle.net/2117/97774