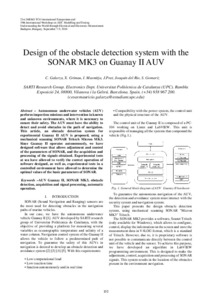 Except where otherwise noted, content on this work is licensed under a Creative Commons license : Attribution-NonCommercial-NoDerivs 3.0 Spain
Abstract
Autonomous underwater vehicles (AUV) perform inspection missions and intervention in known and unknown environments, where it is necessary to ensure their safety. The AUV must have the ability to detect and avoid obstacles in the path of navigation. This article, an obstacle detection system for experimental Guanay II AUV is proposed, using a mechanical scanning SONAR Tritech Micron MK3. Since Guanay II operates autonomously, we have designed software that allows adjustment and control of the parameters of SONAR, and the acquisition and processing of the signals obtained. Experimental tests at sea have allowed to verify the correct operation of software designed, as well as, experimental tests in a controlled environment have allowed to determine the optimal values of the basic parameters of SONAR.
CitationGalarza, C.M., Grimau, X., Masmitja, I., Prat, J., Del Rio, J., Gomariz, S. Design of the obstacle detection system with the SONAR MK3 on Guanay II AUV. A: Symposium on Measurements of Electrical Quantities. "21st IMEKO TC4 International Symposium and 19th International Workshop on ADC Modelling and Testing Understanding the World through Electrical and Electronic Measurement". Budapest: 2016, p. 152-157.
URIhttp://hdl.handle.net/2117/97765
Publisher versionhttps://www.imeko.org/index.php/proceedings
Collections
Share: