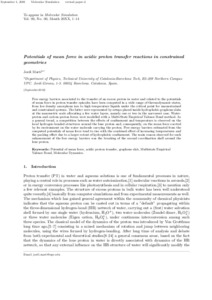 Document typeArticle
Rights accessOpen Access
Abstract
Free energy barriers associated with the transfer of an excess proton in water and related to the potentials of mean force in proton transfer episodes have been computed in a wide range of thermodynamic states, from low-density amorphous ices to high-temperature liquids under the critical point for unconstrained and constrained systems. The latter were represented by set-ups placed inside hydrophobic graphene slabs at the nanometric scale allocating a few water layers, namely one or two in the narrowest case. Water–proton and carbon–proton forces were modelled with a Multi-State Empirical Valence Bond method. As a general trend, a competition between the effects of confinement and temperature is observed on the local hydrogen-bonded structures around the lone proton and, consequently, on the mean force exerted by its environment on the water molecule carrying the proton. Free energy barriers estimated from the computed potentials of mean force tend to rise with the combined effect of increasing temperatures and the packing effect due to a larger extent of hydrophobic confinement. The main reason observed for such enhancement of the free energy barriers was the breaking of the second coordination shell around the lone proton.
CitationMarti, J. Potentials of mean force in acidic proton transfer reactions in constrained geometries. "Molecular simulation", 17 Octubre 2016, vol. 43, núm. 2, p. 134-140.
URIhttp://hdl.handle.net/2117/97725
DOI10.1080/08927022.2016.1239824
ISSN0892-7022
Publisher versionhttp://www.tandfonline.com/doi/full/10.1080/08927022.2016.1239824
Collections
Share: