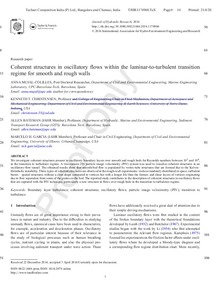 Garcia, Marcelo Horacio
Document typeArticle
Rights accessOpen Access
Abstract
We investigate coherent structures present in oscillatory boundary layers over smooth and rough beds for Reynolds numbers between 103 and 104, in the transition to turbulence regime. A two-camera 2D- particle image velocimetry (PIV) system was used to visualize coherent structures in an oscillatory-flow tunnel. The obtained results show that smooth-bed flow is populated by vortex-tube structures that are formed due to the Kelvin–Helmholtz instability. Three types of coherent structures are observed in the rough-wall experiments: vortices randomly distributed in space; turbulent bursts – spatial structures without a clear shape compared to vortices but with a longer life than the former; and shear layers of vortices originating due to flow separation from some of the grains on the bed. The reported study contributes to the description of coherent structures in oscillatory flows that are captured with the PIV technique, particularly a new structure in flows over rough beds in the transition to turbulence regime.
Description
This is an Accepted Manuscript of an article published by Taylor & Francis Group in [Journal of hydraulic research] on [2016], available online at: http://www.tandfonline.com/10.1080/00221686.2016.1174960
CitationMujal -Colilles, A., Christensen, K. T., Bateman, A., Garcia, M. H. Coherent structures in oscillatory flows within the laminar-to-turbulent transition regime for smooth and rough walls. "Journal of hydraulic research", Abril 2016, vol. 54, núm. 5, p. 503-515.
URIhttp://hdl.handle.net/2117/97719
DOI10.1080/00221686.2016.1174960
ISSN0022-1686
Publisher versionhttp://www.tandfonline.com/doi/full/10.1080/00221686.2016.1174960
Collections
Share: