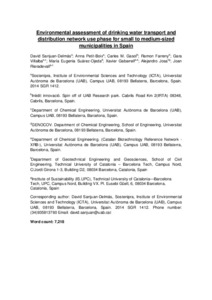 Previous studies assessing the environmental impacts of drinking water supply networks have considered a bottom-up approach, analysing single case studies. This paper presents a top-down approach for the assessment of the operational phase of a water supply network. A representative sample of 50 cities was statistically analysed to find relations between different variables regarding electricity and water consumption linked with the environmental impacts of the network. The results show that some of the variables are clearly related to the relative energy consumption of the network. Such is the case for population size, where small municipalities have up to 14 times higher relative electricity consumption compared with medium-sized municipalities (1.15E-2 as opposed to 8.3E-4 kWh/m3 registered water km of network) due to case-specific factors such as a strong gradient between a water tank and the consumption point. Similarly, the cases showing low population density exhibit 7 times higher relative electricity consumption because of the longer distances that must be covered and the correlation between population density and size. The values found for greenhouse gas (GHG) emissions derived from the energy consumption are consistent with results from previous studies: on average, 5.53 kg of CO2 eq. emissions/inhabitant·year are released, but the variability is very high, ranging from 0.005 to 67.8 kg of CO2 eq. emissions/inhabitant·year. No clearly significant correlations were found between the relative water demand and variables such as seasonality or income per capita, which might indicate that water consumption depends on individual decisions of the population rather than on the variables assessed. Models for the estimation of water demand, length of network and electricity consumption were defined. However, the modelling of electricity consumption presented more difficulties because of its high variability. A protocol for data collection should be defined and implemented in the future to enable the analysis of more high quality case studies and for the definition of more accurate and reliable models.
CitationSanjuan-Delmás, D., Petit-Boix, A., Gasol, C., Farreny, R., Villalba, G., Suárez-Ojeda, M., Gabarrell, X., Josa, A., Rieradevall, J. Environmental assessment of drinking water transport and distribution network use phase for small to medium-sized municipalities in Spain. "Journal of cleaner production", Gener 2015, vol. 87, núm. 15, p. 573-582.
URIhttp://hdl.handle.net/2117/97666
DOI10.1016/j.jclepro.2014.09.042
ISSN0959-6526
Publisher versionhttp://www.sciencedirect.com/science/article/pii/S095965261400972X