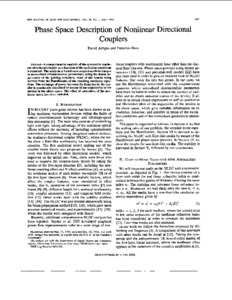 A comprehensive analysis of the symmetric nonlinear directional coupler as a function of the excitation conditions is reported. The analysis is based on a coupled-mode technique in normalized (dimensionless) parameters, using the linear supermodes of the guiding structure, most of the results being derived from the Hamiltonian of the resulting nonlinear equations. The exchange of power between the branches in the coupler is graphically described by means of the trajectories of the motion in the phase space. The effect of saturation of the nonlinear index has been included.
CitationArtigas, D., Dios, V. Phase space description of nonlinear directional couplers. "IEEE journal of quantum electronics", Juliol 1994, vol. 30, núm. 7, p. 1587-1595.
URIhttp://hdl.handle.net/2117/97636
DOI10.1109/3.299490
ISSN0018-9197
Publisher versionhttp://ieeexplore.ieee.org/document/299490/?reload=true&arnumber=299490