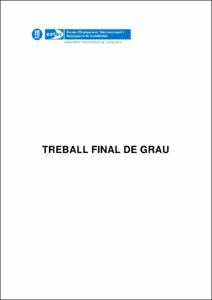 The project consists of the construction of a functional meteorological probe, controlled by an Arduino microcontroller. This probe was design to measure pressure and temperature as functions of the altitude. This device is the first of its kind built at the EETAC, thus a considerable effort of requirement definition has been done. In the present report we describe how all the probesystems were designed, and all the necessary components as well as the reason why they were chosen are described. The resulting design is modular in order to facilitate future improvements/expansions.The steps necessary for the assembly of all the components in a common structure are detailed, as well as the choice of tools and materials. All the systems developed were tested simulating conditions similar to those expected in the real mission.Finally, after the construction and validation processes, all the materials and the tasks needed to launch the probe up to at an altitude of 35 km are detailed.The present report is intended to serve as a guide for futuresimilar projects in EETAC. The resulting device from this work is named FourCast after our surnames.
SubjectsAstronautics, Sondes (Instruments electrònics)
URIhttp://hdl.handle.net/2117/97586