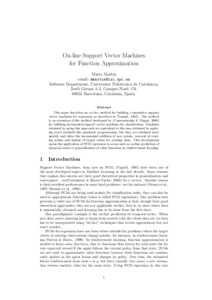 Document typeExternal research report
Rights accessOpen Access
Abstract
This paper describes an on-line method for building epsilon-insensitive support vector machines for regression as described in (Vapnik, 1995). The method is an extension of the method developed by (Cauwenberghs & Poggio, 2000) for building incremental support vector machines for classification. Machines obtained by using this approach are equivalent to the ones obtained by applying exact methods like quadratic programming, but they are obtained more quickly and allow the incremental addition of new points, removal of existing points and update of target values for existing data. This development opens the application of SVM regression to areas such as on-line prediction of temporal series or generalization of value functions in reinforcement learning.
CitationMartin, M. "On-line support vector machines for function approximation". 2002.
Is part ofLSI-02-11-R
URIhttp://hdl.handle.net/2117/97569
Collections
Share: