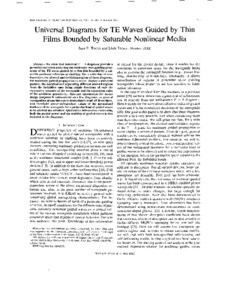 Document typeArticle
Rights accessOpen Access
Abstract
It is shown that universal V-b diagrams provide a powerful tool when analyzing the stationary waveguiding properties of the TE waves guided by a thin film bounded by a saturable nonlinear substrate or cladding. For a wide class of nonlinearities, the allowed and forbidden regions of these diagrams, for a stationary guided propagation to occur, display a universal pattern, the marginal loci separating different allowed regions from the forbidden ones being simple functions of only the asymmetry measure of the waveguide and the saturation value of the nonlinear permittivity. Relevant information for device design purposes is summarized on a few diagrams, so general waveguiding properties can be immediately read-off from them, and threshold power-independent values of the normalized thickness of the waveguide for a particular kind of guided wave to be allowed are obtained. Qualitative information concerning both the guided power and the stability of guided waves is also included in the diagrams.
CitationJuan P. Torres, Torner, L. Universal diagrams for te waves guided by thin films bounded by saturable nonlinear media. "IEEE journal of quantum electronics", Març 1993, vol. 29, núm. 3, p. 917-925.
URIhttp://hdl.handle.net/2117/97559
DOI10.1109/3.206575
ISSN0018-9197
Publisher versionhttp://ieeexplore.ieee.org/document/206575/?reload=true&arnumber=206575
Collections
Share: