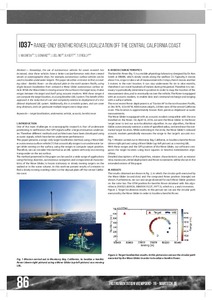 Except where otherwise noted, content on this work is licensed under a Creative Commons license : Attribution-NonCommercial-NoDerivs 3.0 Spain
Abstract
Nowadays, the use of autonomous vehicles for ocean research has increased, since these vehicles have a better cost/performance ratio than crewed vessels or oceanographic ships. For example, autonomous surface vehicles can be used to localize underwater targets. This paper describes a mission to find a crawling robot - Benthic Rover - on the abyssal plain in the north eastern Pacific, using single-beacon localization from onboard a Wave Glider autonomous surface vehicle. While the Wave Glider is moving around the surface in the target zone, it takes ranges between the target and itself using acoustic modems. With these ranges it can compute the target location, as a Long Baseline (LBL) system. The benefit of this approach is the reduction of cost and complexity relative to deployment of a traditional shipboard LBL system. Additionally, this is a mobile system, and can cover long distances, and can geolocate multiple targets over a large area.
CitationMasmitja, I., Gomariz, S., Del Rio, J., Kieft, B., O'Reilly, T.C. Range-only benthic rover localization off the central California coast. "Instrumentation viewpoint (electrònic)", 19 Octubre 2016, núm. 19, p. 86-87.
URIhttp://hdl.handle.net/2117/97549
ISSN1886-4864
Publisher versionhttp://www.upc.edu/cdsarti/martech/usb_2016/paginas/Abstract_Magazine.pdf
Collections
Share: