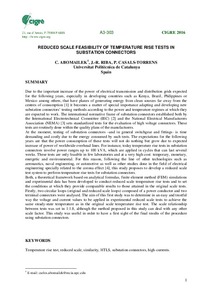 Due to the important increase of the power of electrical transmission and distribution grids expected for the following years, especially in developing countries such as Kenya, Brazil, Philippines or Mexico among others, that have planes of generating energy from clean sources far away from the centres of consumption [1] it becomes a matter of special importance adapting and developing new substation connectors’ testing methods according to the power and temperature regimes at which they are expected to work. The international normative frame of substation connectors established both by the International Electrotechnical Committee (IEC) [2] and the National Electrical Manufacturers Association (NEMA) [3] sets standardized tests for the evaluation of high voltage connectors. These tests are routinely done within the quality plans of the manufacturers. At the moment, testing of substation connectors –and in general switchgear and fittings- is time demanding and costly due to the energy consumed by such tests. The expectations for the following years are that the power consumption of these tests will not do nothing but grow due to expected increase of power of worldwide overhead lines. For instance, today temperature rise tests in substation connectors involve power ranges up to 100 kVA, which are applied in cycles that can last several weeks. These tests are only feasible in few laboratories and at a very high cost: temporary, monetary, energetic and environmental. For this reason, following the line of other technologies such as aeronautics, naval engineering, or automotive as well as other studies done in the field of electrical engineering specially related to the corona effect [4], this study proposes to develop a reduced scale test system to perform temperature rise tests for substation connectors. Both, a theoretical framework based on analytical formulas, finite element method (FEM) simulations and experimental data has been developed to conduct reduced scale temperature rise tests and to set the conditions at which they provide comparable results to those attained in the original scale tests. Firstly, two circular loops (original and reduced scale loops) composed of a power conductor and two terminal connectors were analysed. The aim of this first study was to determine in an easy and trustful way the voltage and current values to be applied in experimental reduced scale tests to achieve the same steady-state temperature as in the original scale temperature rise test. The scale relationship between tests was set in 1:1.8, although the method proposed in this study can deal with any other scale factor. This study was useful in order to have a first sight of the final results of the procedure using substation connectors.
CitationAbomailek, B., Riba, J., Casals, P. Reduced scale feasibility of temperature rise tests in substation connectors. A: International Council on Large Electric Systems. "Actas CIGRE 2016". Paris: 2016.
URIhttp://hdl.handle.net/2117/97533