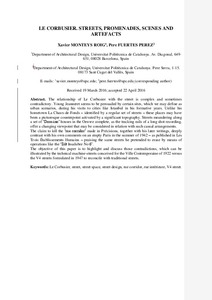 Document typeArticle
PublisherRoutledge
Rights accessOpen Access
Abstract
The relationship of Le Corbusier with the street is complex and sometimes contradictory. Young Jeanneret seems to be persuaded by certain sites, which we may define as urban scenarios, during his visits to cities like Istanbul in his formative years. Unlike his hometown La Chaux-de-Fonds – identified by a regular set of streets – these places may have been a picturesque counterpoint activated by a significant topography. Streets meandering along a set of ‘Dom-ino’ houses in the Oeuvre Complète, as the tracking rails of a long shot recording, offer a changing viewpoint that may be considered in relation with such casual arrangements. The claim to kill the ‘rue corridor’ made in Précisions, together with his later writings, deeply contrast with his own comments on an empty Paris in the summer of 1942 – as published in Les Trois Établissements Humains – praising the same streets he pretended to erase by means of operations like the ‘Ilôt Insalubre No 6’. The objective of this paper is to highlight and discuss those contradictions, which can be illustrated by the technical machine-streets conceived for the Ville Contemporaine of 1922 versus the V4 streets formulated in 1947 to reconcile with traditional streets.
CitationMonteys, X., Fuertes, P. Le Corbusier: streets, promenades, scenes and artefacts. "Journal of Architecture and Urbanism", 16 Juny 2016, vol. 40, núm. 2, p. 151-161.
URIhttp://hdl.handle.net/2117/97531
DOI10.3846/20297955.2016.1194606
ISSN2029-7955
2029-7947
Publisher versionhttp://www.tandfonline.com/
Collections
Share: