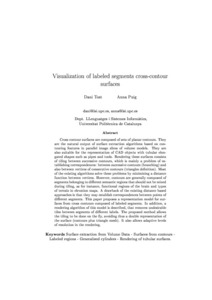 Cross contour surfaces are composed of sets of planar contours. They are the natural output of surface extraction algorithms based on contouring features in parallel image slices of volume models. They are also suitable for the representation of CAD objects with tubular elongated shapes such as pipes and tools. Rendering these surfaces consists of tiling between successive contours, which is mainly a problem of establishing correspondences: between successive contours (branching) and also between vertices of consecutive contours (triangles definition). Most of the existing algorithms solve these problems by minimizing a distance function between vertices. However, contours are generally composed of segments belonging to different semantic regions that should not be mixed during tiling, as for instance, functional regions of the brain and types of terrain in elevation maps. A drawback of the existing distance based approaches is that they may establish correspondences between points of different segments. This paper proposes a representation model for surfaces from cross contours composed of labeled segments. In addition, a rendering algorithm of this model is described, that removes undesirable tiles between segments of different labels. The proposed method allows the tiling to be done on the fly, avoiding thus a double representation of the surface (contours plus triangle mesh). It also allows adaptive levels of resolution in the rendering.
Is part ofLSI-00-69-R
URIhttp://hdl.handle.net/2117/97527