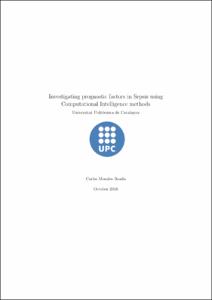 Document typeMaster thesis
Rights accessOpen Access
Abstract
Sepsis is a major challenge in medicine. It is in fact a traversal condition affecting people of all ages and is not respectful of lifestyle choices. There are many diseases in medicine whose definition is uncertain and cause high rates of mortality in medical services, and Sepsis is a flagship example. In an intensive care unit (ICU), patients in an advanced stage of Sepsis carries a high burden, namely a high mortality rate (about 50%) and higher costs of treatment compared with other ICU patients. After an operation, patients have a tendency to develop a phenomenon related to the mechanism of immune system. The pathophysiology of Sepsis in humans is poorly understood, even is one of the main causes of death for non-coronary ICU patients. It is a traversal condition affecting people of all ages. This syndrome was defined by consensus statement in 1992 to consist of certain criteria. Severe sepsis was defined as organ failure in the setting of sepsis, and septic shock was defined as severe sepsis where the organ failure was hypotension. The ICU environment is one of the scenarios in which critical decision making tasks are most relevant with respect to the outcome for the patient, and it is in this specific context that this thesis tries to make a contribution. The research reported in this document deals with the problem of Sepsis data analysis in general. On the one hand, a causal relationship study is made over a set of roughly one hundred different ICU measurements to detect hidden patterns among them, and to find the direct conditioners of the patients outcome, by means of probabilistic approaches (i.e. Bayesian Networks). On the other hand, the problem of survival prediction in patients that have suffered Septic Shock is faced applying Computational Intelligence (i.e. Artificial Neural Networks) and Machine learning approaches (Support Vector Machines), and more specifically in two different approaches: (1) predicting directly the outcome of the patient and (2) predicting the organ dysfunction risk, that can also lead patient to death or severe cognitive consequences. The data set used in this work is the public available MEDAN database, which consists of 412 patients that have suffered abdominal Septic Shock, of whom 201 died. The data were recorded from 71 German Intensive Care Units from 1998 to 2002.
SubjectsComputational intelligence, Septicemia, Intel·ligència computacional, Septicèmia
DegreeMÀSTER UNIVERSITARI EN INTEL·LIGÈNCIA ARTIFICIAL (Pla 2012)
URIhttp://hdl.handle.net/2117/97503
Collections
Share: