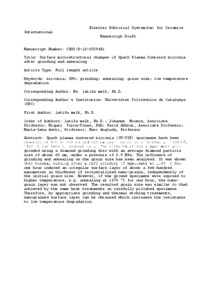 Except where otherwise noted, content on this work is licensed under a Creative Commons license : Attribution-NonCommercial-NoDerivs 3.0 Spain
Abstract
Spark plasma sintered zirconia (3Y-TZP) specimens have been produced of 140 nm 372 nm and 753 nm grain sizes by sintering at 1250 °C, 1450 °C and 1600 °C, respectively. The sintered zirconia specimens were grinded using a diamond grinding disc with an average diamond particle size of about 60 µm, under a pressure of 0.9 MPa. The influence of grinding and annealing on the grain size has been analysed. It was shown that thermal etching after a ruff grinding of specimens at 1100 °C for one hour induced an irregular surface layer of about a few hundred nanometres in thickness of recrystallized nano-grains, independently of the initial grain size. However, if the ground specimens were exposed to higher temperature, e.g. annealing at 1575 °C for one hour, the nano-grain layer was not observed. The resulted grain size was similar to that achieved by the same heat treatments on carefully polished specimens. Therefore, by appropriate grinding and thermal etching treatments, nanograined surface layer can be obtained which increases the resistance to low temperature degradation.
CitationMelk, L., Mouzon, J., Turon-Vinas, M., Akhtar, F., Antti, Marta-lena, Anglada, M. Surface microstructural changes of spark plasma sintered zirconia after grinding and annealing. "Ceramics international", 1 Novembre 2016, vol. 42, núm. 14, p. 15610-15617.
URIhttp://hdl.handle.net/2117/97496
DOI10.1016/j.ceramint.2016.07.014
ISSN0272-8842
Publisher versionhttp://www.sciencedirect.com/science/article/pii/S0272884216310689
Collections
Share: