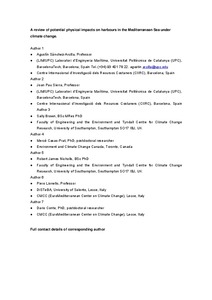 The potential impact of climate change on port operations and infrastructures has received much less attention than the corresponding impact for beach systems. However, ports have always been vulnerable to weather extremes and climate change could enhance such occurrences at timescales comparable to the design lifetime of harbour engineering structures. The analysis in this paper starts with the main climatic variables affecting harbour engineering and exploitation. It continues with a review of the available projections for such variables first at global scale and then at a regional scale (Catalan coast in the western Mediterranean) as a study case for similar environments in the planet. The detailed assessment of impacts starts from downscaled projections for mean sea level and wave storms (wind not considered in the paper). This is followed by an analysis of the port operations and infrastructure performance that are relevant from a climate perspective. The key climatic factors here considered are relative sea level, wave storm features (height, period, direction and duration) and their combined effect, which is expected to produce the highest impacts. The paper ends with a discussion and some examples of analyses aiming at port adaptation to future climate change.