A comparative molecular dynamics study of sulfuric and methanesulfonic acids 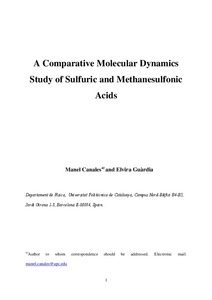 Except where otherwise noted, content on this work is licensed under a Creative Commons license : Attribution-NonCommercial-NoDerivs 3.0 Spain
Abstract
The molecular dynamics computer simulation method has been used to study sulfuric and methanesulfonic acids. Calculations have been carried out between 200 K and 400 K using reliable force fields. Thermodynamic properties, such as the density, the heat of vaporization and the melting temperature, have been computed. Moreover, structural and dynamical quantities, such as the radial distribution functions, the shear viscosity and the diffusion coefficients, have also been calculated. The results display a noticeable good agreement with the available experimental data. A hydrogen bond analysis has also been performed, which shows, on one hand, that sulfuric acid has a hydrogen bond network which resembles the one of water; and, on the other hand, that methanesulfonic acid has a hydrogen bond structure which, in some details, recalls the one of methanol, but with a more important presence of single bonds and, to a lesser extent, of branching. Finally, the dynamics of the formation and rupture of hydrogen bonds has also been analyzed. To this end, the interrupted or slow hydrogen bonding lifetimes have been calculated using two different procedures. Our findings suggest that the sulfuric acid hydrogen bond network is more labile than the methanesulfonic acid one.
CitationCanales, M., Guardia, E. A comparative molecular dynamics study of sulfuric and methanesulfonic acids. "Journal of molecular liquids", 1 Desembre 2016, vol. 224, Part A, p. 1064-1073.
URIhttp://hdl.handle.net/2117/97448
DOI10.1016/j.molliq.2016.10.097
ISSN0167-7322
Publisher versionhttp://www.sciencedirect.com/science/article/pii/S016773221631827X
Collections
Share: