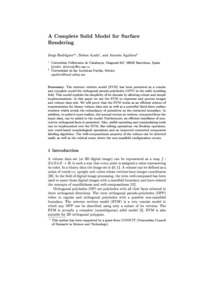 Aguilera, Antonio
Document typeExternal research report
Rights accessOpen Access
Abstract
The Extreme Vertices Model (EVM) has been presented as a concise and complete model for representing orthogonal pseudo-polyhedra (OPP) in the solid modeling field. This model exploits the simplicity of its domain by allowing robust and simple implementations. In this paper we use the EVM to represent and process images and volume data sets. We will prove that the EVM works as an efficient scheme of representation for binary volume data sets as well as a powerful block-form surface renderer which avoids the redundancy of primitives on the extracted isosurface. In addition, to achieve more realism, the normal vectors computed by gradient of grey-level from the input data can be added to the model. Furthermore, an efficient tessellator of non-convex orthogonal faces is presented. Also, useful operating and manipulating tools can be implemented over the EVM, like editing operations via Boolean operators, non voxel-based morphological operations and an improved connected component labeling algorithm. The well-composedness property of the volume can be detected easily as well as the critical zones where the non-manifold configuration occurs.
CitationRodríguez, J., Ayala, D., Aguilera, A. "A Complete solid model for surface rendering". 2003.
Is part ofLSI-03-3-R
URIhttp://hdl.handle.net/2117/97391
Collections
Share: