Influence of hydrogen bonds and temperature on dielectric properties 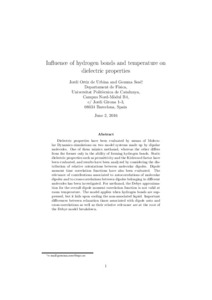 Document typeArticle
Rights accessOpen Access
Abstract
Dielectric properties are evaluated by means of molecular dynamics simulations on two model systems made up of dipolar molecules. One of them mimics methanol, whereas the other differs from the former only in the ability to form hydrogen bonds. Static dielectric properties such as the permittivity and the Kirkwood factor are evaluated, and results are analyzed by considering the distribution of relative orientations between molecular dipoles. Dipole moment–time correlation functions are also evaluated. The relevance of contributions associated with autocorrelations of molecular dipoles and with cross-correlations between dipoles belonging to different molecules has been investigated. For methanol, the Debye approximation for the overall dipole moment correlation function is not valid at room temperature. The model applies when hydrogen bonds are suppressed, but it fails upon cooling the nonassociated liquid. Important differences between relaxation times associated with dipole auto- versus cross-correlations as well as their relative relevance are at the root of the Debye model breakdown.
CitationOrtiz de Urbina, J., Sese, G. Influence of hydrogen bonds and temperature on dielectric properties. "Physical review E: statistical, nonlinear, and soft matter physics", 6 Juliol 2016, vol. 94, núm. 1, p. 012605-1-012605-7.
URIhttp://hdl.handle.net/2117/97367
DOI10.1103/PhysRevE.94.012605
ISSN1539-3755
Publisher versionhttp://journals.aps.org/pre/abstract/10.1103/PhysRevE.94.012605
Collections
Share: