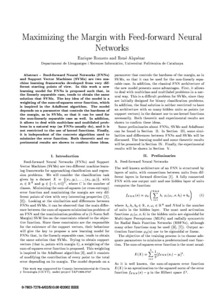 Màrquez Villodre, Lluís
Carreras Pérez, Xavier
Document typeResearch report
Rights accessOpen Access
Abstract
Feed-forward Neural Networks (FNN) and Support Vector Machines (SVM) are two machine learning frameworks developed from very different starting points of view. In this work a new learning model for FNN is proposed such that, in the linearly separable case, it tends to obtain the same solution as SVM. The key idea of the model is a weighting of the sum-of-squares error function, which is inspired by the AdaBoost algorithm. As in SVM, the hardness of the margin can be controlled, so that this model can be also used for the non-linearly separable case. In addition, it is not restricted to the use of kernel functions, and it allows to deal with multiclass and multilabel problems as FNN usually do. Finally, it is independent of the particular algorithm used to minimize the error function. Theoretic and experimental results, on synthetic and real-world problems, are shown to confirm these claims. Several empirical comparisons among this new model, SVM and AdaBoost have been made in order to study the agreement between the predictions made by the respective classifiers. The results obtained show that similar performance does not imply similar predictions, suggesting that different models can be combined leading to better performance.
CitationRomero, E., Marquez, L., Carreras, X. "Margin maximization with feed-forward neural networks: a comparative study with support vector machines and AdaBoost". 2003.
Is part ofLSI-03-30-R
URIhttp://hdl.handle.net/2117/97318
Collections
Share: