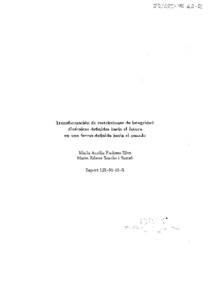 Dynamic integrity constraints (DIC) have been represented either as past-directed formulas or as future-directed formulas. This work, inscribed in the scope of the Deductive Conceptual Models of information systems, is an effort to prove the equivalence of these two kinds of formulas. Our work proposes a method that transforms any DIC specified through a future-directed formula into an equivalent past-directed formula. This method deals with the integrity constraints defined by a first-order logic language with explicit time that have the form of a denial. The method is based on the construction of time graphs to represent the temporal sequence of the facts presented in a formula. The first step consists in representing the initial formula defined in future tense by means of a time graph. Next a new time graph in a reverse temporal interpretation is constructed. Finally starting from this new graph the method generates a past-directed formula to represent the initial integrity constraint.
CitationPacheco, M., Sancho, Maria-Ribera. "Transformación de restricciones de integridad dinámicas definidas hacia el futuro en una forma definida hacia el pasado". 1996.
URIhttp://hdl.handle.net/2117/97293