Nuclear data activities at the n_TOF facility at CERN 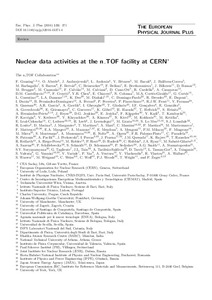 Document typeArticle
Rights accessOpen Access
Abstract
Nuclear data in general, and neutron-induced reaction cross sections in particular, are important for a wide variety of research fields. They play a key role in the safety and criticality assessment of nuclear technology, not only for existing power reactors but also for radiation dosimetry, medical applications, the transmutation of nuclear waste, accelerator-driven systems, fuel cycle investigations and future reactor systems as in Generation IV. Applications of nuclear data are also related to research fields as the study of nuclear level densities and stellar nucleosynthesis. Simulations and calculations of nuclear technology applications largely rely on evaluated nuclear data libraries. The evaluations in these libraries are based both on experimental data and theoretical models. Experimental nuclear reaction data are compiled on a worldwide basis by the international network of Nuclear Reaction Data Centres (NRDC) in the EXFOR database. The EXFOR database forms an important link between nuclear data measurements and the evaluated data libraries. CERN's neutron time-of-flight facility n_TOF has produced a considerable amount of experimental data since it has become fully operational with the start of the scientific measurement programme in 2001. While for a long period a single measurement station (EAR1) located at 185 m from the neutron production target was available, the construction of a second beam line at 20 m (EAR2) in 2014 has substantially increased the measurement capabilities of the facility. An outline of the experimental nuclear data activities at CERN's neutron time-of-flight facility n_TOF will be presented.
CitationGunsing, F., Aberle, O., Andrzejewski, J., Calviño, F., Casanovas, A., Cortes, G., Riego-Pérez, A., Tarifeño, A. Nuclear data activities at the n_TOF facility at CERN. "European physical journal plus", 21 Octubre 2016, vol. 131, núm. 10, p. 1-13.
URIhttp://hdl.handle.net/2117/97254
DOI10.1140/epjp/i2016-16371-4
ISSN2190-5444
Publisher versionhttp://link.springer.com/article/10.1140%2Fepjp%2Fi2016-16371-4
Collections
Share: