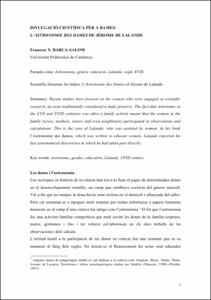 Document typeExternal research report
Rights accessOpen Access
Abstract
Recent studies have focused on the women who were engaged in scientific research, an area traditionally considered a male preserve. The fact that astronomy in the XVII and XVIII centuries was often a family activity meant that the women in the family (wives, mothers, sisters and even neighbours) participated in observations and calculations. This is the case of Lalande, who was assisted by women. In his book l’Astronomie des dames, which was written to educate women, Lalande reported his last astronomical discoveries in which he had taken part directly.
URIhttp://hdl.handle.net/2117/9720
Collections
Share: