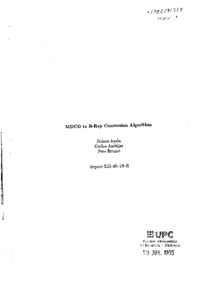 Document typeExternal research report
Rights accessOpen Access
Abstract
Spatial enumeration models are widely used in several fields. These models are approximate but the major disadvantage is the lack of concision. In order to avoid such verbosity, hierarchical encodings such as octrees have been proposed and several approaches include more information in order to reduce the approximate character of the model. Maximal Division Classical Octrees are classical octrees with terminal grey nodes that contain part of the surface of the object. Conversion algorithms between representation models are necessary in order to exploit the advantages of each one. In this report an algorithm that converts from a MDCO model to a Boundary Representation model is presented. The algorithm is based on the classification of the terminal grey nodes according to the color of its grey vertices. Moreover, a non-iterative version of the general algorithm is proposed and implemented for the particular case of isothetic polyhedra.
CitationAyala, D., Andujar, C., Brunet, P. "MDCO to B-Rep conversion algorithm". 1995.
Is part ofLSI-95-16-R
URIhttp://hdl.handle.net/2117/97103
Collections
Share: