The nose of the sperm whale: overviews of functional design, structural homologies and evolution 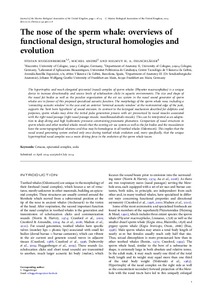 Oelschläger, Helmut A.
Document typeArticle
Rights accessOpen Access
Abstract
The hypertrophic and much elongated epicranial (nasal) complex of sperm whales (Physeter macrocephalus) is a unique device to increase directionality and source levels of echolocation clicks in aquatic environments. The size and shape of the nasal fat bodies as well as the peculiar organization of the air sac system in the nasal sound generator of sperm whales are in favour of this proposed specialized acoustic function. The morphology of the sperm whale nose, including a 'connecting acoustic window' in the case and an anterior 'terminal acoustic window' at the rostroventral edge of the junk, supports the 'bent horn hypothesis' of sound emission. In contrast to the laryngeal mechanism described for dolphins and porpoises, sperm whales may drive the initial pulse generation process with air pressurized by nasal muscles associated with the right nasal passage (right nasal passage muscle, maxillonasolabialis muscle). This can be interpreted as an adaptation to deep-diving and high hydrostatic pressures constraining pneumatic phonation. Comparison of nasal structures in sperm whales and other toothed whales reveals that the existing air sac system as well as the fat bodies and the musculature have the same topographical relations and thus may be homologous in all toothed whales (Odontoceti). This implies that the nasal sound generating system evolved only once during toothed whale evolution and, more specifically, that the unique hypertrophied nasal complex was a main driving force in the evolution of the sperm whale taxon.
CitationHuggenberger, S., Andre, M., Oelschläger, H. The nose of the sperm whale: overviews of functional design, structural homologies and evolution. "Journal of the Marine Biological Association of the United Kingdom", Juny 2016, vol. 96, núm. 4, p. 783-806.
URIhttp://hdl.handle.net/2117/97052
DOI10.1017/S0025315414001118
ISSN0025-3154
Publisher versionhttp://journals.cambridge.org/action/displayAbstract?fromPage=online&aid=10308905&fileId=S0025315414001118
Collections
Share: