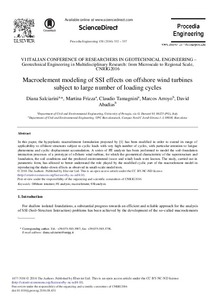 In this paper, the hypoplastic macroelement formulation proposed by [1] has been modified in order to extend its range of applicability to offshore structures subject to cyclic loads with very high number of cycles, with particular attention to fatigue phenomena and cyclic displacement accumulation. A series of FE analysis has been performed to model the soil–foundation interaction processes of a prototype of offshore wind turbine, for which the geometrical characteristic of the superstructure and foundation, the soil conditions and the predicted environmental (wave and wind) loads were known. The study, carried out in parametric form, has allowed to better understand the role played by the modified cyclic part of the macroelement model in reproducing the shake–down effects as observed in small–scale model tests.
CitationSalciarini, D., Frizza, M., Tamagnini, C., Arroyo, M., Abadías, D. Macroelement modeling of SSI effects on offshore wind turbines subject to large number of loading cycles. A: Italian Conference of Researchers in Geotechnical Engineering. "Procedia Engineering, Volume 158, Pages 1-552 (2016): VI Italian Conference of Researchers in Geotechnical Engineering, CNRIG2016 - Geotechnical Engineering in Multidisciplinary Research: from Microscale to Regional Scale, 22-23 September 2016, Bologna (Italy)". Bologna: Elsevier, 2016, p. 332-337.
URIhttp://hdl.handle.net/2117/97014
DOI10.1016/j.proeng.2016.08.451
ISBN1877-7058
Publisher versionhttp://www.sciencedirect.com/science/article/pii/S1877705816326595