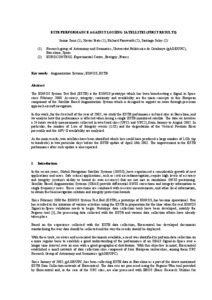 Farnworth, Richard
Soley, Santiago
Document typeConference report
Rights accessOpen Access
All rights reserved. This work is protected by the corresponding intellectual and industrial property rights. Without prejudice to any existing legal exemptions, reproduction, distribution, public communication or transformation of this work are prohibited without permission of the copyright holder
Abstract
The EGNOS System Test Bed (ESTB) is the EGNOS prototype which has been broadcasting a Signal in Space since February 2000. Accuracy, integrity, continuity and availability are the main concepts in this European component of the Satellite Based Augmentation System which is designed to support en route through precision approach aircraft navigation. In this work, for the first half of the year of 2002, we study the ESTB performance in fixed sites in Barcelona, and we analyze how this performance is affected when losing a single ESTB monitored satellite. The data set involves a 24 hours weekly measurements collected in two fixed sites (UPC1 and UPC2), from January to August 2002. In particular, the number of Loss of Integrity events (LOI) and the degradation of the Vertical Position Error percentile and the APV-II availability are analyzed. As the main results, two satellites have been identified which loss could have produced a large number of LOIs (up to hundreds) in two particular days before the ESTB update of April 16th 2002. The improvement in the ESTB performance after such update is also reported.
CitationSanz Subirana, Jaume; Prats menéndez, Xavier; Farnworth, Richard; Soley, Santiago. ESTB performance against lossing satellites (first results). A 5a Setmana Geomàtica Barcelona: cartografía, telemática y navegación. Barcelona, 2003
URIhttp://hdl.handle.net/2117/970
Collections
Share: