Discontinuity and pied-piping in categorial grammar 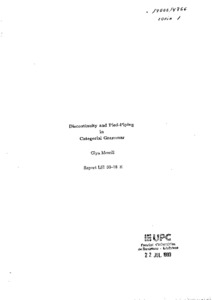 Document typeExternal research report
Rights accessOpen Access
Abstract
Discontinuity refers to the phenomena in many natural language constructions whereby signs differ markedly in their prosodic and semantic forms. As such it presents interesting demands on monostratal computational formalisms which aspire to descriptive adequacy. Pied-piping, in particular, is argued by Pollard (1988) to motivate phrase structure-style feature percolation. In the context of categorial grammar, Bach (1984), Moortgat (1988, 1990, 1991) and others have sought to provide categorial operators suited to discontinuity. These attempts encounter certain difficulties with respect to model theory and/or proof theory, difficulties which the current proposals are intended to resolve. These proposals are accompanied by introduction of a new categorial proof format: labelled Fitch-style natural deduction. The associative and non-associative Lambek calculi are sound and complete with respect to interpretation by residuation with respect to prosodic adjunction operations in semigroup and groupoid algebras (Buszkowski 1986; Kandulski 1988). In Moortgat and Morrill (1991) is is shown how to give calculi for families of categorial operators, each defined by residuation with respect to an operation of prosodic adjunction (associative, non-associative, or with interactive axioms). The present paper treats discontinuity in this way, by residuation with respect to three adjunctions: + (associative), (., .) (split-point marking), and W (wrapping) related by the equation (s_1, s_2)Ws_3 = s_1+s_3+s_2. The system is illustrated by reference to particle verbs, discontinuous idioms, quantifier scope and quantifier scope ambiguity, pied-piping, gapping, and object-antecedent reflexivisation.
CitationMorrill, G. "Discontinuity and pied-piping in categorial grammar". 1993.
Is part ofLSI-93-18-R
URIhttp://hdl.handle.net/2117/96884
Collections
Share: