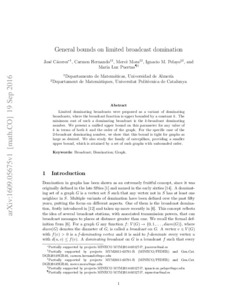 Puertas, Maria Luz
Cáceres, José
Document typeExternal research report
Rights accessOpen Access
Abstract
Limited dominating broadcasts were proposed as a variant of dominating broadcasts, where the broadcast function is upper bounded by a constant k . The minimum cost of such a dominating broadcast is the k -broadcast dominating number. We present a uni ed upper bound on this parameter for any value of k in terms of both k and the order of the graph. For the speci c case of the 2-broadcast dominating number, we show that this bound is tight for graphs as large as desired. We also study the family of caterpillars, providing a smaller upper bound, which is attained by a set of such graphs with unbounded order.
CitationHernando, M., Mora, M., Pelayo, I. M., Luz Puertas, M., Cáceres, José. "General bounds on limited broadcast domination". 2016.
URIhttp://hdl.handle.net/2117/96711
URL other repositoryhttp://128.84.21.199/pdf/1609.05675v1.pdf
Collections
Share: