Wave energy potential along the Atlantic coast of Morocco 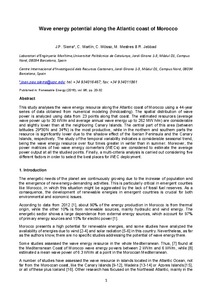 This study analyses the wave energy resource along the Atlantic coast of Morocco using a 44-year series of data obtained from numerical modeling (hindcasting). The spatial distribution of wave power is analyzed using data from 23 points along that coast. The estimated resources (average wave power up to 30 kW/m and average annual wave energy up to 262 MW h/m) are considerable and slightly lower than at the neighboring Canary Islands. The central part of this area (between latitudes 29°30'N and 34°N) is the most productive, while in the northern and southern parts the resource is significantly lower due to the shadow effect of the Iberian Peninsula and the Canary Islands, respectively. The study of the temporal variability indicates a considerable seasonal trend, being the wave energy resource over four times greater in winter than in summer. Moreover, the power matrices of two wave energy converters (WECs) are considered to estimate the average power output at all the studied points. Finally, a multi-criteria analysis is carried out considering five different factors in order to select the best places for WEC deployment.
CitationSierra, J.P., Martín, C., Mösso, C., Mestres, M., Jebbad, R. Wave energy potential along the Atlantic coast of Morocco. "Renewable energy", Octubre 2016, vol. 96, part A, p. 20-32.
URIhttp://hdl.handle.net/2117/96682
DOI10.1016/j.renene.2016.04.071
ISSN0960-1481
Publisher versionhttp://www.sciencedirect.com/science/article/pii/S0960148116303731