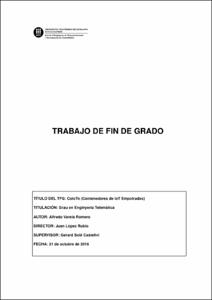 In recent years, the progress on IoT-related issues has seen a very high increase in the effort on research, both for devices and technologies. The high demand for these products is forcing many companies to change their market orientation and focus on the world of sensors, or even to invest in facilities related to this topic in order to improve productivity. Research is not only focused on creating new protocols or new technologies, but also on reusing some which are already known, by applying slight improvements or just keeping them unchanged, as they are fully compatible. For the reasons presented above, this project is born, in which a new product for a company will be developed, in such a way that the company will have all its infrastructure accessible remotely. Therefore, it will be possible to deploy their applications in a place where, for example, Internet access or connection is null, natural disasters have occurred, etc. In parallel, the research of a new technology to deploy applications will be studied too, being it speci&#64257;cally used in the &#64257;eld of servers, but also taken to the world of IoT to solve problems such as the high resources consumption when doing a system update, making new deployments and reducing their times. In the project, a Raspberry Pi is used to simulate a central node or sink of data which, by using Docker, can deploy all the core infrastructure of the AlterAid enterprise (Aaaida). Somesensorswillalsobeused, andbymeansofBluetooththeyconnecttotheRaspberry Pi, establishing a network which will allow the sending of data and its proper storage to be managed by the corresponding applications.
SubjectsInternet of things, Internet de les coses
URIhttp://hdl.handle.net/2117/96673