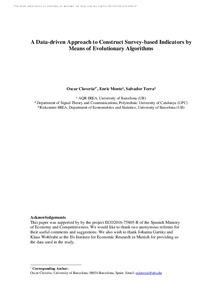 Torra Porras, Salvador
Document typeArticle
Rights accessOpen Access
Abstract
In this paper we propose a data-driven approach for the construction of survey-based indicators using large data sets. We make use of agents’ expectations about a wide range of economic variables contained in the World Economic Survey, which is a tendency survey conducted by the Ifo Institute for Economic Research. By means of genetic programming we estimate a symbolic regression that links survey-based expectations to a quantitative variable used as a yardstick, deriving mathematical functional forms that approximate the target variable. We use the evolution of GDP as a target. This set of empirically-generated indicators of economic growth, are used as building blocks to construct an economic indicator. We compare the proposed indicator to the Economic Climate Index, and we evaluate its predictive performance to track the evolution of the GDP in ten European economies. We find that in most countries the proposed indicator outperforms forecasts generated by a benchmark model.
CitationClaveria, O., Monte, E., Torra Porras, S. A data-driven approach to construct survey-based indicators by means of evolutionary algorithms. "Social indicators research", 9 Novembre 2016, vol. 135, núm. 1, p. 1-14.
URIhttp://hdl.handle.net/2117/96667
DOI10.1007/s11205-016-1490-3
ISSN0303-8300
Publisher versionhttp://link.springer.com/article/10.1007/s11205-016-1490-3
Collections
Share: