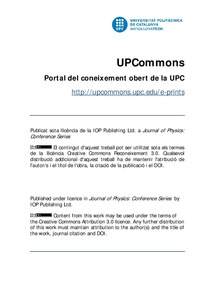 Document typeConference report
PublisherInstitute of Physics (IOP)
Rights accessOpen Access
Abstract
At the crossroad between flow topology analysis and the theory of turbulence, a new eddy-viscosity model for Large-eddy simulation has been recently proposed by Trias et al.[PoF, 27, 065103 (2015)]. The S3PQR-model has the proper cubic near-wall behaviour and no intrinsic limitations for statistically inhomogeneous flows. In this work, the new model has been tested for an air turbulent Rayleigh-Benard convection in a rectangular cell of aspect ratio unity and n span-wise open-ended distance. To do so, direct numerical simulation has been carried out at two Rayleigh numbers Ra = 108 and 1010, to assess the model performance and investigate a priori the effect of the turbulent Prandtl number. Using an approximate formula based on the Taylor series expansion, the turbulent Prandtl number has been calculated and revealed a constant and Ra-independent value across the bulk region equals to 0.55. It is found that the turbulent components of eddy-viscosity and eddy-diffusivity are positively prevalent to maintain a turbulent wind essentially driven by the mean buoyant force at the sidewalls. On the other hand, the new eddy-viscosity model is preliminary tested for the case of Ra = 108 and showed overestimation of heat flux within the boundary layer but fairly good prediction of turbulent kinetics at this moderate turbulent flow.
Description
Published under licence in Journal of Physics: Conference Series by IOP Publishing Ltd. Content from this work may be used under the terms of the Creative Commons Attribution 3.0 licence. Any further distribution of this work must maintain attribution to the author(s) and the title of the work, journal citation and DOI.
CitationDabbagh, F., Trias, F. X., Gorobets, A., Oliva, A. New subgrid-scale models for large-eddy simulation of Rayleigh-Bénard convection. A: European Thermal-Sciences Conference. "Journal of Physics: Conference Series, vol. 745, September 2016". Krakow: Institute of Physics (IOP), 2016, p. 1-8.
URIhttp://hdl.handle.net/2117/96616
DOI10.1088/1742-6596/745/3/032041
ISBN1742-6596
Publisher versionhttp://iopscience.iop.org/article/10.1088/1742-6596/745/3/032041/meta
Collections
Share: