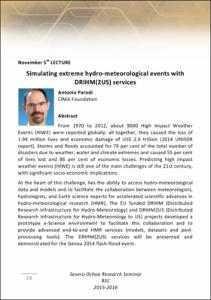 Show full item record
Parodi, Antonio
Document typeConference report
PublisherBarcelona Supercomputing Center
Rights accessOpen Access
Abstract
From 1970 to 2012, about 9000 High Impact Weather Events (HIWE) were reported globally: all together, they caused the loss of 1.94 million lives and economic damage of US$ 2.4 trillion (2014 UNISDR report). Storms and floods accounted for 79 per cent of the total number of disasters due to weather, water and climate extremes and caused 55 per cent of lives lost and 86 per cent of economic losses. Predicting high impact weather events (HIWE) is still one of the main challenges of the 21st century, with significant socio-economic implications. At the heart of this challenge, lies the ability to access hydro-meteorological data and models and to facilitate the collaboration between meteorologists, hydrologists, and Earth science experts for accelerated scientific advances in hydro-meteorological research (HMR). The EU funded DRIHM (Distributed Research Infrastructure for Hydro-Meteorology) and DRIHM2US (Distributed Research Infrastructure for Hydro-Meteorology to US) projects developed a prototype e-Science environment to facilitate this collaboration and to provide advanced end-to-end HMR services (models, datasets and post-processing tools). The DRIHM(2US) services will be presented and demonstrated for the Genoa 2014 flash-flood event.
CitationParodi, Antonio. Simulating extreme hydro-meteorological events with DRIHM(2US) services. A: 2nd Severo Ochoa Research Seminar Lectures at BSC, Barcelona, 2015-2016. "Book of abstracts". Barcelona: Barcelona Supercomputing Center, 2016, p. 18-19.
URIhttp://hdl.handle.net/2117/96564
Collections
Share: