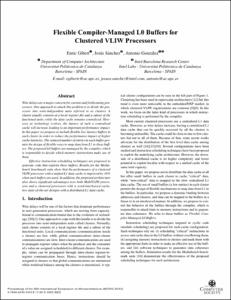 Document typeConference report
PublisherInstitute of Electrical and Electronics Engineers (IEEE)
Rights accessOpen Access
Abstract
Wire delays are a major concern for current and forthcoming processors. One approach to attack this problem is to divide the processor into semi-independent units referred to as clusters. A cluster usually consists of a local register file and a subset of the functional units, while the data cache remains centralized. However, as technology evolves, the latency of such a centralized cache increase leading to an important performance impact. In this paper, we propose to include flexible low-latency buffers in each cluster in order to reduce the performance impact of higher cache latencies. The reduced number of entries in each buffer permits the design of flexible ways to map data from L1 to these buffers. The proposed L0 buffers are managed by the compiler, which is responsible to decide which memory instructions make us of them. Effective instruction scheduling techniques are proposed to generate code that exploits these buffers. Results for the Mediabench benchmark suite show that the performance of a clustered VLIW processor with a unified L1 data cache is improved by 16% when such buffers are used. In addition, the proposed architecture also shows significant advantages over both MultiVLIW processors and clustered processors with a word-interleaved cache, two state-of-the-art designs with a distributed L1 data cache.
CitationGibert, E., Sánchez, F., González, A. Flexible compiler-managed L0 buffers for clustered VLIW processors. A: Annual IEEE/ACM International Symposium on Microarchitecture. "36th Annual IEEE/ACM International Symposium on Microarchitecture, 2003, MICRO-36: proceedings". San Diego, California: Institute of Electrical and Electronics Engineers (IEEE), 2003, p. 315-325.
URIhttp://hdl.handle.net/2117/96552
DOI10.1109/MICRO.2003.1253205
ISBN0-7695-2043-X
Publisher versionhttp://ieeexplore.ieee.org/document/1253205/?reload=true&arnumber=1253205&count=39&index=28
Collections
Share: