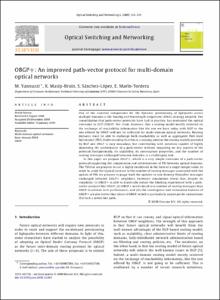 Document typeArticle
Rights accessOpen Access
Abstract
One of the essential components for the dynamic provisioning of lightpaths across multiple domains is the Routing and Wavelength Assignment (RWA) strategy adopted. The consolidation that path-vector protocols have had in practice, has motivated the optical extension to BGP (OBGP). We claim, however, that a routing model mostly centered on the exchange of reachability information–like the one we have today with BGP or the one offered by OBGP–will not be sufficient for multi-domain optical networks. Routing domains must be able to exchange both reachability as well as aggregated Path-State Information (PSI). Understanding that this is a missing piece in the routing models provided by BGP and OBGP is easy nowadays, but contributing with solutions capable of highly improving the performance of a path-vector without impacting on key aspects of the protocol–fundamentally, its scalability, its convergence properties, and the number of routing messages exchanged between domains–is a challenging task. In this paper we propose OBGP +, which is a very simple extension of a path-vector protocol supporting the computation and advertisement of PSI between optical domains. The PSI that we propose to use is highly condensed in the form of a single integer value. In order to avoid the typical increase in the number of routing messages associated with the update of PSI, we propose to piggy-back the updates in non-dummy Keepalive messages exchanged between OBGP+ neighbors. Extensive simulations reveal that, despite its simplicity: (i) OBGP+ is able to drastically reduce the blocking experienced with a path-vector protocol like OBGP; (ii) OBGP+ needs much less number of routing messages than OBGP to achieve such performance; and (iii) the convergence and restoration features of OBGP+ are also better than those of OBGP, which is particularly important for connections that lack a protection path.
CitationYannuzzi, M. [et al.]. OBGP+: An improved path-vector protocol for multi-domain optical networks. "Optical switching and networking", Abril 2009, vol. 6, núm. SI:2, p. 111-119.
URIhttp://hdl.handle.net/2117/9655
DOI10.1016/j.osn.2008.12.001
ISSN1573-4277
Collections
Share: