A Maple package for semidefinite programming 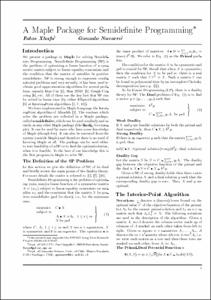 We present a package in Maple for solving Semidefinite Programming. Semidefinite Programming (SP) is the problem of optimizing a linear function of a symmetric matrix subject to linear equality constraints and the condition that the matrix of variables be positive semidefinite. SP is strong enough to represent combinatorial problems and very recently, it has been used to obtain good approximation algorithms for several problems, namely Max Cut, Max 2SAT, Graph Coloring, etc. All of them use the key fact that SP can be solved in linear time (by either Ellipsoid algorithms or Interior-Point algorithms). We have implemented in Maple Language the Interior-Point algorithm of Alizadeh. The routines which solve the problem are collected in a Maple package, called semidefinite, which can be used similarly and as easily as any other Maple package (like linalg, for example). It can be used by users who have some knowledge of Maple (though few). It can also be executed from the system (outside Maple) and therefore there is no need of knowing Maple at all. The package can be used either to test feasibility of a SP or to find the optimal solution, when it is feasible. To the best of our knowledge this is the first program in Maple to solve SP.
CitationXhafa, F., Navarro, G. "A Maple package for semidefinite programming". 1996.
Is part ofR96-28
URIhttp://hdl.handle.net/2117/96476